Investors focused on Environmental, Social and Governance issues have only recently begun to focus on the midstream oil and gas pipelines.

Data from The Forum for Sustainable and Responsible Investment shows that ESG-focused investors have accumulated almost $30 trillion in total assets between 1995 and 2018, and that amount is expected to grow to almost $50 trillion by 2040, making the ESG market one of the fastest-growing sources of investment for midstream companies.

There is not a lot of clarity about ESG measures for the midstream companies, but one entity, SASB, has issued some measurable criteria and, as these criteria become more widely adopted, pipeline companies will need to focus on them to attract capital from ESG investors.

Environmental, Social and Governance (ESG) measures have been a tool used by investors for quite a while. According to data from The Forum for Sustainable and Responsible Investment, ESG-focused investors have accumulated almost $30 trillion in total assets between 1995 and 2018, and that amount is expected to grow to almost $50 trillion by 2040, making the ESG market one of the fastest-growing sources of investment for companies. These investors have only recently begun to focus on the midstream oil and gas pipelines.

In 2019, TC Energy released its inaugural Report on Sustainability and Climate Change. In that report, TC Energy attributed the fact that its stock outperformed key Canadian and U.S. indices by almost fivefold since 2000 to its focus on robust governance, enterprise risk management, excellence in environmental stewardship and Indigenous and landowner relations, and meaningful and ongoing socioeconomic benefits and community involvement. Enbridge, in its most recent sustainability report issued earlier this year, noted that it was focused on three key areas: safety and asset integrity, community and indigenous engagement, and energy transition and climate change.

Today we look at two key measures for the twelve largest U.S. natural gas pipelines that are reported annually to the Pipeline and Hazardous Materials Safety Administration (PHMSA). As we explain, these measures are generally comparable to two of the key measures that the Sustainability Accounting Standards Board (SASB), one of the leading standard-setting entities, recommends be reported and monitored for midstream companies. As shown below, there is a wide range of performance on these metrics among the companies. Some are clearly improving -- but others are not. While all ESG measures are controversial, the fact that ESG standards are here to stay is best evidenced by the attention that the major companies, such as Enbridge and TC Energy, are giving them.

Who Decides What ESG Measures Matter?

The ESG landscape is a soup bowl of acronyms, with an array of entities providing guidance from the broad to the specific and everywhere in between. Right now, there simply is no “one” standard reporting system. Some reporting standards are geared more towards the “E” while others look at equal parts “E” “S” and “G.” Environmental criteria may include a company’s energy use and natural resource conservation, and reporting measures may ask a company to report its procedures on disposing of hazardous waste and management of toxic emissions. Social criteria typically look more at the company’s relationships with its communities and employees.

Governance criteria typically are focused on broader issues such as the composition of the board of directors, its voting methods and conflicts of interest policies. One of the leading standard-setting entities that actually issues recommendations of specific measures is SASB. The lack of one clear standard is demonstrated by the fact that TC Energy references many SASB standards in its report, while Enbridge relies more on the reporting standards developed by the Global Reporting Initiative, but indicates it is also monitoring other frameworks like SASB.

SASB’s approach is to define specific measures that can be used across companies to allow for a ready comparison of ESG results, as with companies’ financial results. For midstream companies, SASB focuses on five key measures: GHG emissions, air quality, ecological impacts, competitive behavior and critical incident risk management. The two measures we look at below fall into this last category.

As described by SASB, it wants companies to report on the number of pipeline incidents, the percentage of incidents that are significant, and the percentage of the total pipeline inspected each year. PHMSA requires pipelines to report annually on very similar data. First, it requires reporting on the total number of “leaks” that occurred on the company’s entire system and the number and significance of those incidents within high consequence areas (HCA).

While SASB requires a report on the gross number, we show the number of incidents per 1000 miles of pipeline to allow for the differences in total miles. Second, PHMSA requires the pipelines to report the total miles of a company’s system that are inspected through various means each year. This number can be easily converted to the percentage recommended for reporting by SASB.

The Data for the Largest Twelve Pipelines

We started our analysis for presentation purposes by limiting the analysis to only those pipelines that reported having at least 6,000 miles of interstate pipeline in service in 2019. For each of those pipelines, we then calculated the average number of incidents reported per 1000 miles of pipe from 2010 to 2019.

As seen above, the annual average number of non-HCA events per mile varies widely from less than one for Natural Gas Pipeline Company of America to more than twelve for Panhandle Eastern Pipeline. Similarly, the annual average number of events within HCAs ranged from none for Northern Natural Gas Company to over four for both Columbia Gas Transmission and Texas Eastern Transmission. We then looked further into the reports of the pipelines that reported substantially more than the average, and determined whether the trend for each was going up or down. 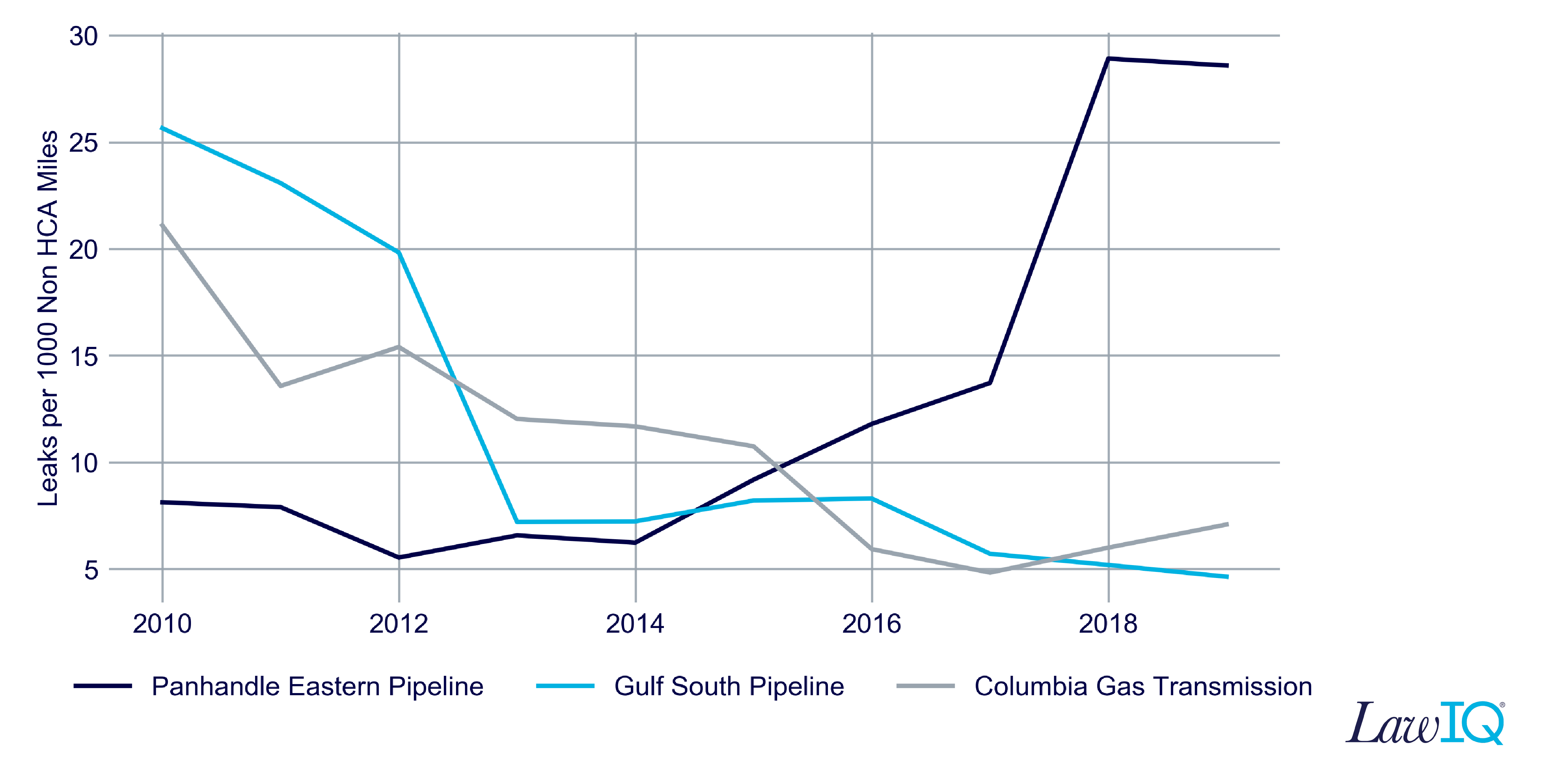 As seen above, the non-HCA rates for Columbia Gas Transmission and Gulf South have been trending down over the last decade, while the trend for Panhandle Eastern is clearly in the opposite direction. 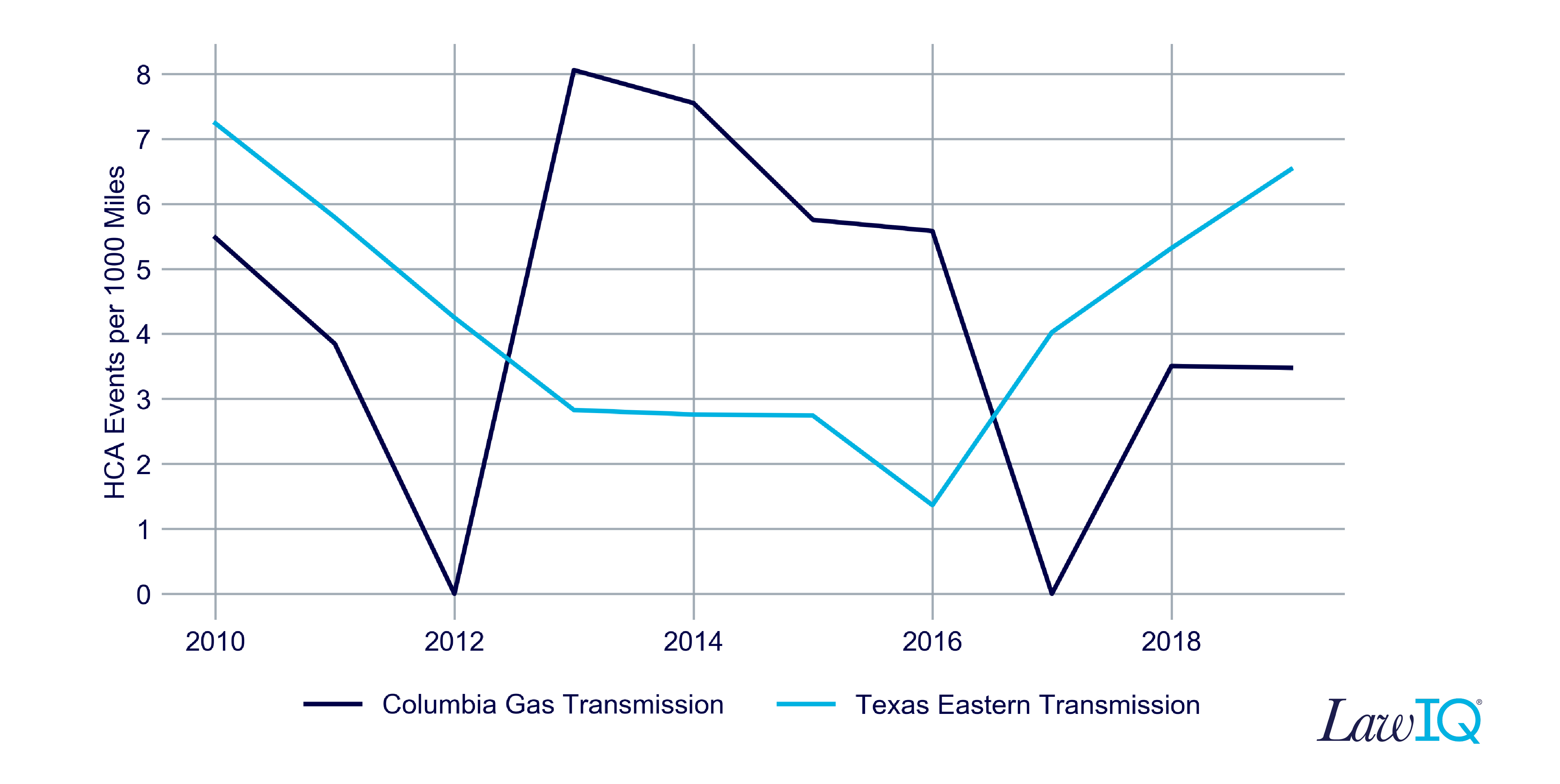 For the HCA events, Texas Eastern’s event rate went down through 2016 but has ticked back up, whereas Columbia Gas Transmission’s event rate, while bouncing around quite a bit, appears to be trending downward.

We similarly calculated the percentage of the total pipeline miles that each company reported as being inspected each year over the last decade.

As shown above, the average percentage of a company’s total pipeline inspected each year varied widely, even when averaged over an entire decade from a low of 8% for Colorado Interstate Gas to a high of over 40% for Texas Eastern Transmission. Once again, we dove into the annual results for the two pipelines that reported average inspection rates below 10% to see what the trend line was for each.

As seen above, the inspection rate for Northern Natural has been steadily improving over the last decade, so that by 2019, it was at the average rate for the industry. Conversely, Colorado Interstate Gas has shown little to no trend in its overall rate, which has stayed consistently below the industry’s 20% annual average.

We can run a similar analysis for any group of pipelines, including those owned by a particular public company, if you would like to either benchmark your own company against others or understand how the various public companies stack up against each other on these key ESG measures.