FERC Environmental Review Timelines Improve -- But Costs are Up

Over the last decade, there was a huge surge in the number of natural gas projects that FERC was being asked to approve.

Now that the 2020 FERC fiscal year has come to a close, our data indicates that the lengthening of the environmental review timelines was due to the increased workload on FERC staff. However, Commission decisions are still taking 75% longer than in 2013. The recent return to more normal timelines has not yet reduced costs, which, over the past decade, have increased substantially.

Anyone familiar with FERC’s review of natural gas projects will know that the timelines in recent years have been getting longer and longer. Once the huge building boom from the middle of the past decade ended, the industry considered a key question: would there be any improvement in the timelines? The 2020 FERC fiscal year just ended on September 30, and we can begin to get a picture of the last decade in its entirety.

As we discuss below, there appears to be good news with regard to the time it is taking FERC to complete the environmental reviews as the number of projects have come down from the extreme highs in the middle of the decade. While the median duration for FERC’s environmental review has returned to levels like those in 2012 and 2013, the time it takes the Commission to issue its order is much longer than what it was then. So while the time frames for a certificate are trending back down, there is certainly room for improvement, especially at the Commission level and in the Office of General Counsel. Also, while the timelines have started to come down, the same cannot be said for costs, other than materials, as they continue to climb.

The Number of Projects Grows as Does the Time for Approval

The world changed in the middle of the last decade as the shale revolution caused a huge increase in the number of projects being submitted to FERC for approval. At the same time, the opposition to such projects increased dramatically, and the one-time sleepy agency found itself in the crosshairs of environmental opposition groups. At this month’s open meeting, Commissioner Glick had to come to the defense of Chairman Chatterjee’s family, who had their “Adopt-a-Highway” sign defaced, after the Commission allowed Mountain Valley Pipeline to restart construction.

Therefore, it will not surprise anyone to find that, as the projects increased along with the opposition, the timelines for both environmental review and issuance of the FERC certificate lengthened substantially.

In the chart above, we track not only the “backlog” of projects at the beginning of each FERC fiscal year, but also the number of new projects filed that year. The new projects peaked at 63 in 2015 and the backlog peaked the next year at 74. In each of those years, FERC had on its plate over 100 cases that it was reviewing. Interestingly, the median time for the environmental review phase peaked that same year, 2016, at almost exactly ten months. Similarly, the median time for the Commission decision phase, which we define as the period from the issuance of the environmental document to the issuance of the FERC certificate, saw a similar rise, with both periods more than doubling from 2011, and the decision phase almost tripling. Combining the two periods meant that the combined median was almost exactly 400 days, or more than one year.

Was the Lengthening From Opposition or From Workload?

The fear in the industry was that this substantial extension of the review cycle was a permanent event, caused primarily by the opposition groups. The data would have supported that fear in 2017 and 2018 as the backlog and new projects dropped much more quickly than the median time periods did. However, now that we have data for almost all of the projects proposed in 2019, both time periods have decreased in length, with the environmental review period returning to levels similar to those in 2013, when the number of combined projects under review was very similar, 52 projects in 2013 and 57 in 2019.

Sadly, we have not seen a return to normal levels for the decision phase, as it is almost 75% longer than in 2013. It is unclear why it is taking the Commission 75% longer to make its decision now, as compared to 2013, but it could be a combination of Commission process choices and general opposition.

It appears that Chairman Chatterjee has changed FERC behavior in that he appears to prefer issuing certificate decisions only in conjunction with FERC’s monthly open meetings. While it was a fairly clear trend in early 2020 when we wrote about it, the fact that every certificate issued for projects from fiscal year 2019 was issued in conjunction with an open meeting seems to confirm that this is now a standard practice. That practice alone could be adding about 15 days of the 59-day increase in the median, assuming that in the past, decisions were issued throughout the month. The other factor could still be opposition and comments filed on the environmental documents, which the Commission typically addresses in the certificate order. The increase in those comments and the need to address them could be slowing the overall preparation of the orders.

While there may be some return to normalcy for the time it takes to receive a FERC certificate, the time savings has not yet been reflected in the data for the costs of projects. The graph below shows the cost per inch-mile for projects that were placed into service over the last decade. It separates those costs into three categories: labor, materials and all other costs. 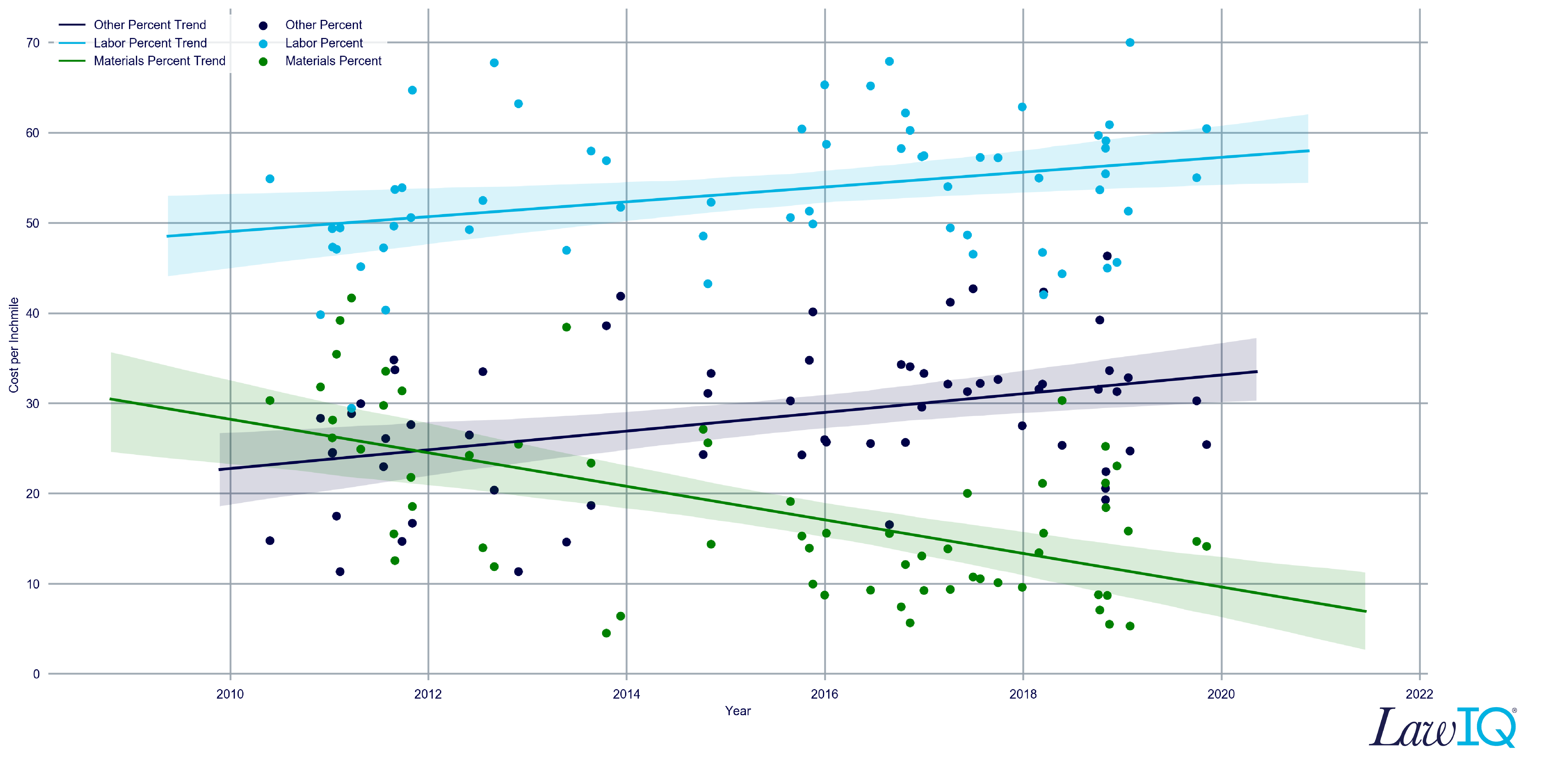 As seen above, material costs per inch-mile, that would generally not be impacted by schedule changes and delays, have been falling over that time. Conversely, the labor costs and all other costs have simply continued to increase, and have been increasing so fast that they are completely eliminating the savings from the reduction in material costs. Thus, while FERC may be getting better at processing applications, the overall costs of projects continue to rise. This may be a result of the fact that the newest projects have not yet reported their final costs. But for now, we cannot yet show that the return to more customary review times will result in a return to more normal cost expectations.