FERC requires all pipelines to allow its shippers to release their capacity when the shipper is not using it.

While the data is published each day, tracking it across multiple companies is difficult. Not only does LawIQ make this easier for all of the Kinder Morgan, TC Energy and Williams pipelines, but our repository of the historical data that we are creating allows our users to gain a longer-term perspective on market trends that is not available elsewhere.

FERC regulations allow shippers to sublet the capacity they hold to other parties when the holder of that capacity does not need it. Not only must the pipelines allow for this capacity release, they actually have to facilitate it through the pipeline’s electronic bulletin board (EBB). This secondary market of pipeline capacity ranges from very active to almost non-existent on some pipelines and is difficult to monitor, because each pipeline’s EBB is somewhat unique in how it reports this data. We have been working with our customers to make this data more accessible. LawIQ can now alert subscribers by daily email of the prior day’s capacity releases and park and loan transactions reported on the EBBs of the pipelines owned by Kinder Morgan, Williams and TC Energy. Our focus on technology can suppress our creativity, so we call this the “ETA” for EBB Transaction Alerts.

These daily reports are posted on the pipeline’s EBB for only 90 days, but we are keeping them for customers forever, so they can be used to spot long-term trends. To introduce this capability, today we look at the overall level of data being collected and then dive into two of its extremes: capacity releases of one month or less in duration, and capacity releases with a term greater than five years. Both provide an interesting snapshot of how the capacity release market is being used.

The Volume of Transactions

For this analysis, we are focusing on transactions reported since May 1, 2020. We collect data on capacity releases and park and loans from each pipeline’s EBB. In the future, we could also collect EBB data about discounted contracts, which, like the other data being collected, disappears after ninety days, even though the underlying contracts could last for years. Would this be of interest to you? Please let us know.

Set forth below is the total number of transactions each of the pipelines has reported during the time period. 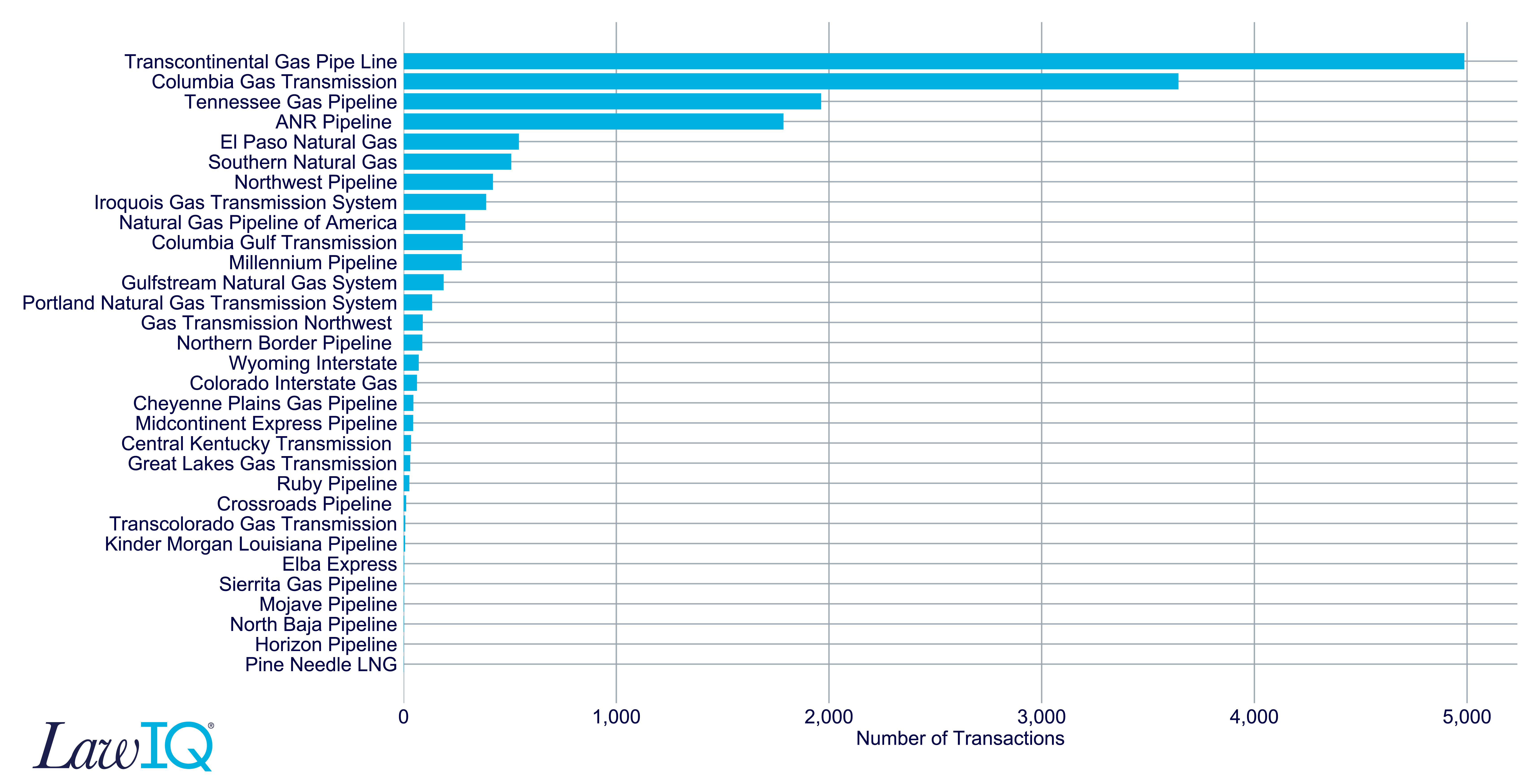 As seen above, the level of activity on each pipeline varies widely, from the thousands for the major pipelines to less than a handful for the smaller ones.

As seen above, almost 90% of all transactions reported are for capacity that is being released for one month or less. Note that there is some double-counting going on, because our data spans multiple months; the same capacity could have been released multiple times for very short periods during that period. However, it is still a good indicator that most of the capacity being released is for very short periods.

Looking at the major companies participating in the short-term capacity release market, there are those releasing their capacity (releasers) and those taking on that capacity (releasees). Most of the major releasers are local distribution companies (LDC) that either have release obligations to competitive retail suppliers, or may simply not need the capacity for the summer months. The non-LDC that released the largest amount of capacity during the time period was Antero Resources. 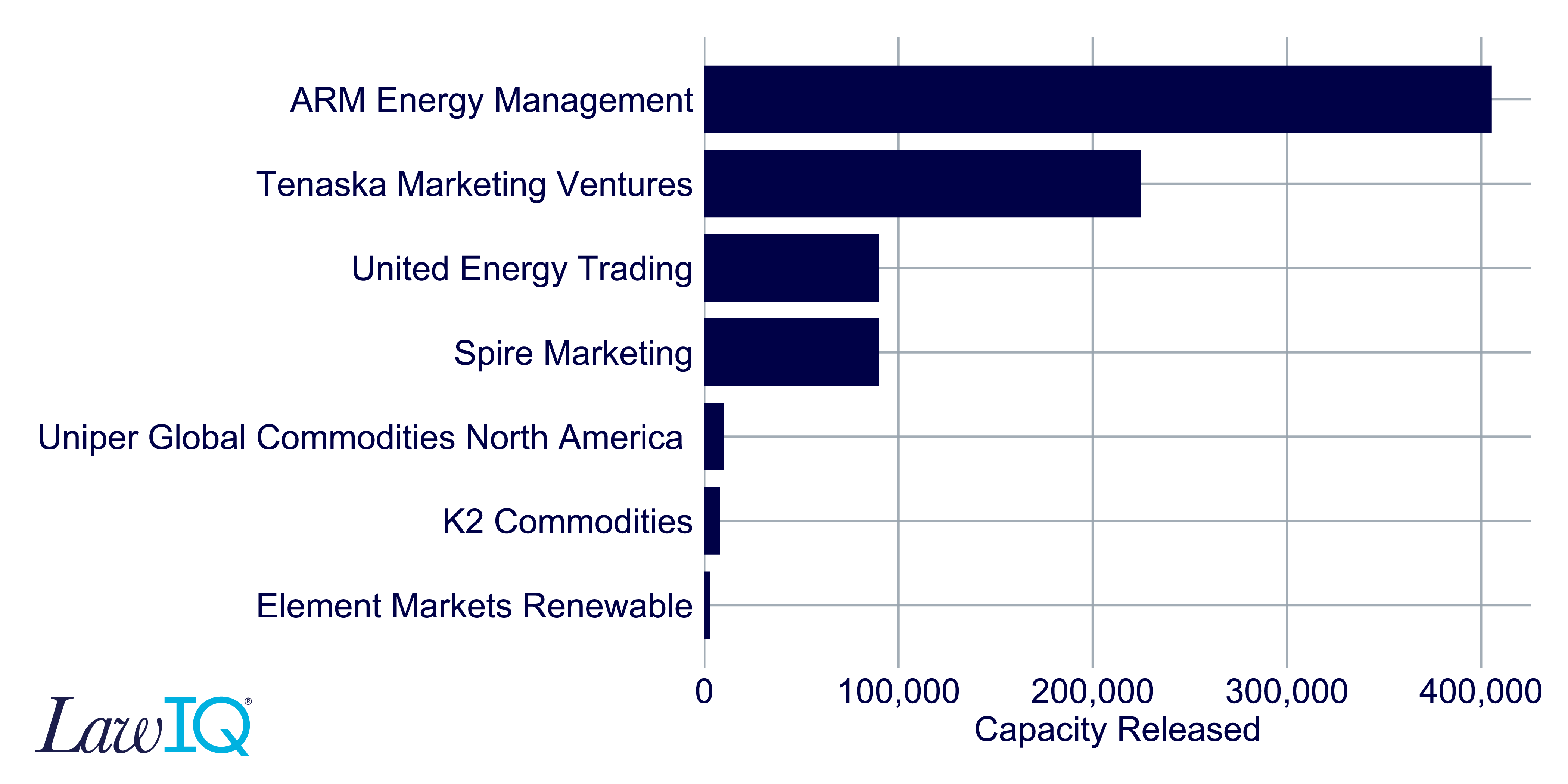 As seen above, during this almost four-month period, Antero released an approximate total of one Bcf/day of capacity. Most of these contracts were for just one month, and the capacity being released on a monthly basis was about 250,000 dth/day in June, July and August. It is clear that Antero is regularly releasing its capacity to more than just one marketer.

From the perspective of the releasee, we see that the most active releasees tend to be retail choice marketers or just affiliates of the LDCs, like Southstar Energy Services, an affiliate of Southern Company, or Direct Energy, a major retail choice provider. The most active participant on the releasee side of the business in the analyzed time period not matching this profile appears to be Vitol. Our data shows Vitol took almost 1.4 Bcf/day of capacity. 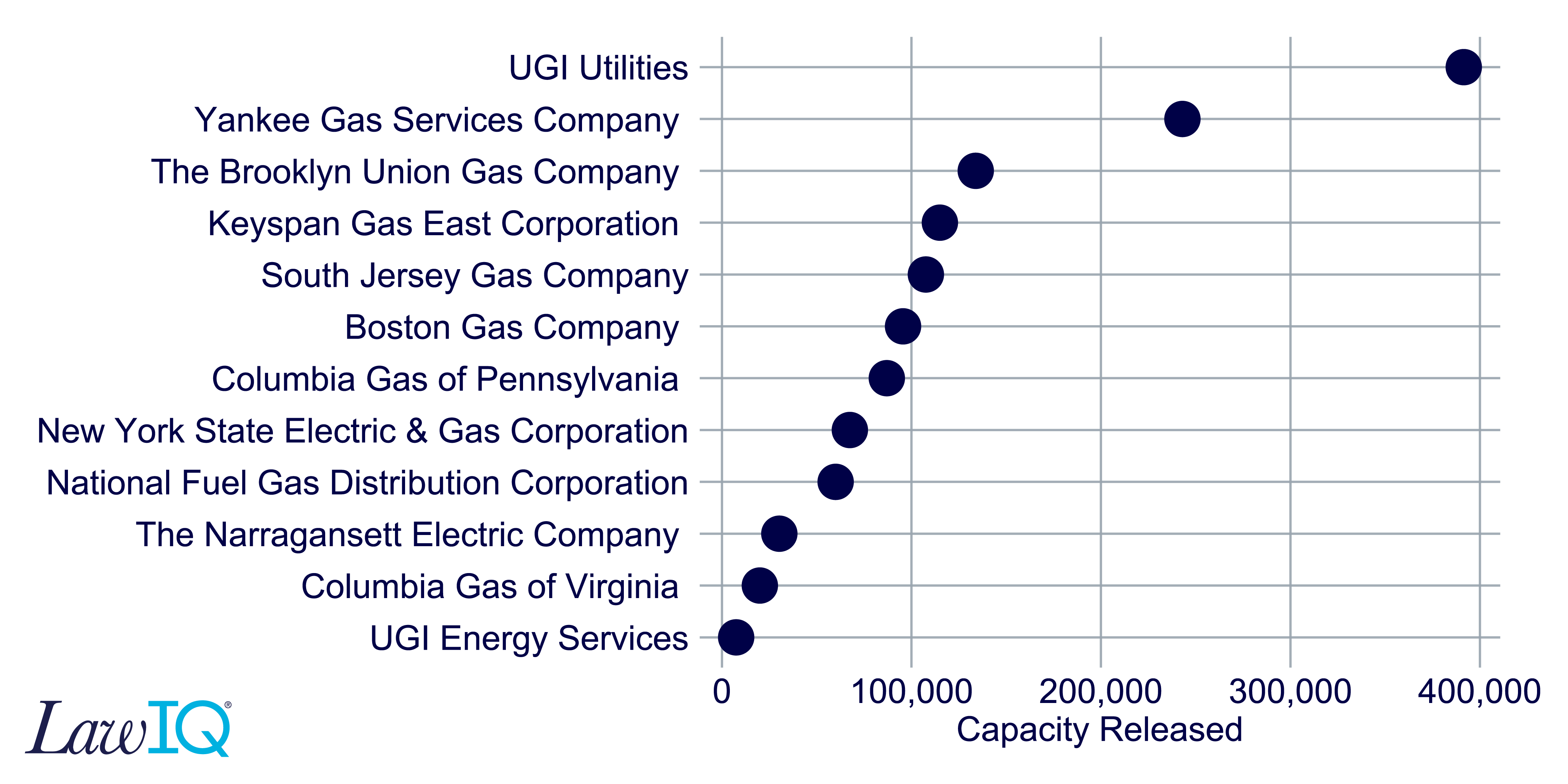 Diving deeper shows this capacity was about evenly split between capacity held for just a week or less and for just one month. The monthly capacity grew from just 115,000 dth/day in June, to 380,000 dth/day for the month of August. As seen above, Vitol was active in taking capacity from more than just one utility or even just one utility holding company - spreading its receipt of releases around multiple LDCs.

While the sheer number of releases is concentrated on the short-term end of the spectrum, there are long-term releases reflected in our data as well. Most of these appear to be transfers within a parent organization. For example, Mitsui & Company Cameron LNG Sales transferred 300,000 dth/day of capacity it held on Columbia Gulf and Tennessee Gas Pipeline to its affiliate, Mitsui & Company Energy Marketing and Services. These contracts extend out to 2039 and 2029, respectively. But, there are some long-term releases to non-affiliates as well. For instance, CFE International released almost 90,000 dth/day it held on El Paso Natural Gas to Sempra Gas and Power Marketing. Similarly, Cascade Natural Gas released over 150,000 dth/day it held on Northwest Pipeline to Tenaska Marketing Ventures. The CFE contracts extend through 2035 and the Cascade Natural Gas contracts run until 2026.

If you are interested in the short-term outlook for these transactions and would like to receive the ETA daily alert about them, please let us know. If you would like to use the data for a greater understanding of the overall market for capacity, our Advisory Services team would be happy to help you research specific issues.