Cost of Project Delays and Overruns - Analyzing Midship, Rover and Others 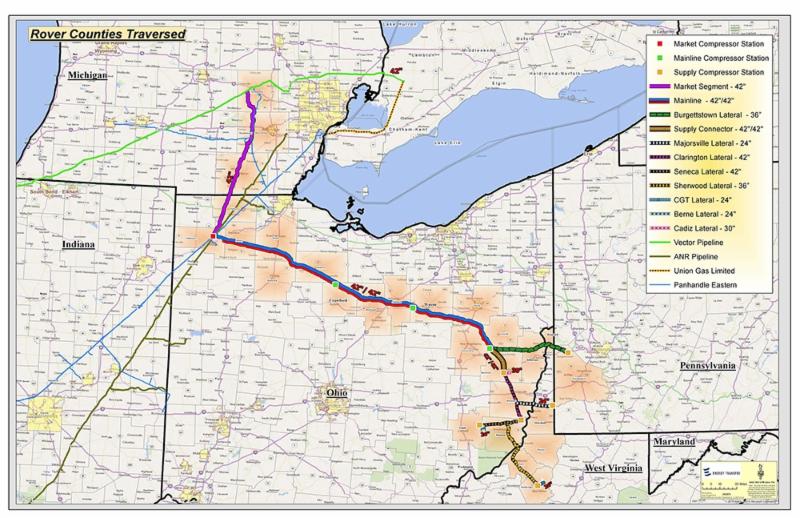 A project developer’s ability to set achievable schedules and budgets is critical to meeting its financial goals. Many consider schedules and budgets to be flip sides of the same coin. A common refrain during project execution is that “you can be on schedule or on budget but not both.” For this Insights , we used our analytics platform’s data to analyze the initial and reported final costs combined with an analysis of the costs of delays for three recent major projects (Rover, Nexus, and Atlantic Sunrise) that are in service and compared the results to Cheniere’s Midship Project.

A cost overrun is typically defined and calculated as the difference between a project’s original budget and its final costs. Quantifying the impact of a schedule delay is more challenging and often less transparent in final calculations and reporting of returns on invested capital. Doing so requires assumptions about the timing and amount of future cash flows. And as our readers - in particular, our project finance and investment readers - know, the time to first cash flow is critical to the present value and internal rate of return for a project.

We conducted a basic discounted cash flow analysis to quantify in-service date (ISD) delays and subsequent first cash flows. To do so, we used the time delta between the company’s originally expected ISDs and the actual phased ISD realization of contracted cash flows. We then calculated the present value (using a cost of capital discount rate of 6%) of the daily cash flows for the difference between the two. We computed the cash flows using shipper contractual volumes and rates and adjusted for partial in-service cash flows ahead of the full ISD where applicable. We call this value the Deferred Revenue Cost. Finally, we added the cost overruns.

Some projects require a more complex calculation because the initial contracts may call for a particular rate, but have an escalation clause to allow for an increase in that rate if costs exceed a certain threshold. When costs exceed the threshold, that means that the company is receiving larger cash flows than it had originally anticipated. To account for the rate escalations, the methodology described above would need to compare the expected value of the cash flows at the original rate to the expected value of the delayed, but increased, cash flows.

By adding the cost overruns and the Deferred Revenue Costs, we are able to combine the impact of both cost and schedule changes into a single number and compare that to the original projected cost.

Due to a lack of data about the precise commercial terms for projects under construction, it is not possible to apply the exact methodology we used for the above projects to analyze Midship, but it is possible to begin creating a worst-case calculator for the cost of additional project delays. For example, Cheniere originally expected the Midship project to be in service by April 1, 2019. The company is required to file its final tariff 60 days before it goes into service, and has not yet done so. Therefore, we can assume it will not be in-service before the end of this year -- although its most recent disclosure indicates Q4 2019.

We also know some information about the volume, term, and recourse rate for the contracts at the time the project was originally proposed. By using that information as a proxy for the actual contract rates, we can estimate how much the delay is costing the project in terms of the present value of its projected cash flow. Assuming the project goes into service on December 31 of this year, the delayed revenue cost would be $44,879,827. Therefore, if Midship is in service in Q4 2019 (roughly eight months later than the company originally expected), then, if Midship had used LawIQ’s optimistic (p25) estimate (i.e., December 29, 2019), it could have avoided $44,879,827 in Deferred Revenue Cost.

The value of an accurate projected in-service date is illustrated by the examples of Rover, using the actual data, and Midship, using our worst-case data, alongside LawIQ’s p25 estimates for in-service dates for both projects. 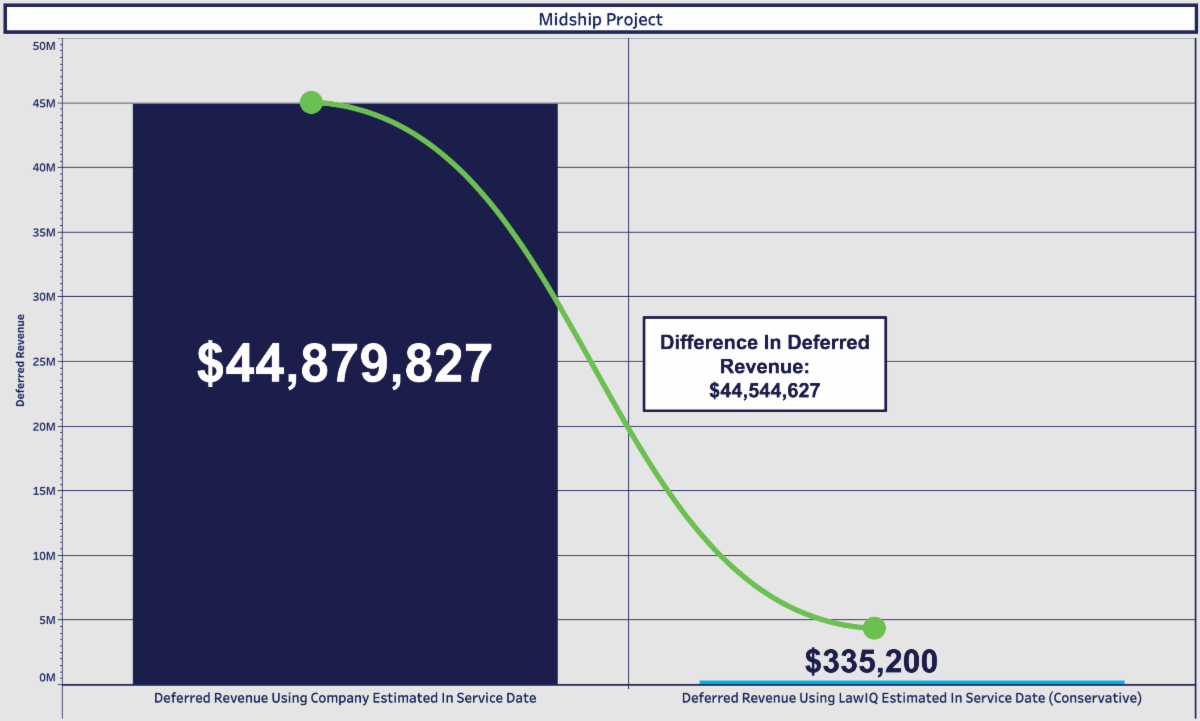 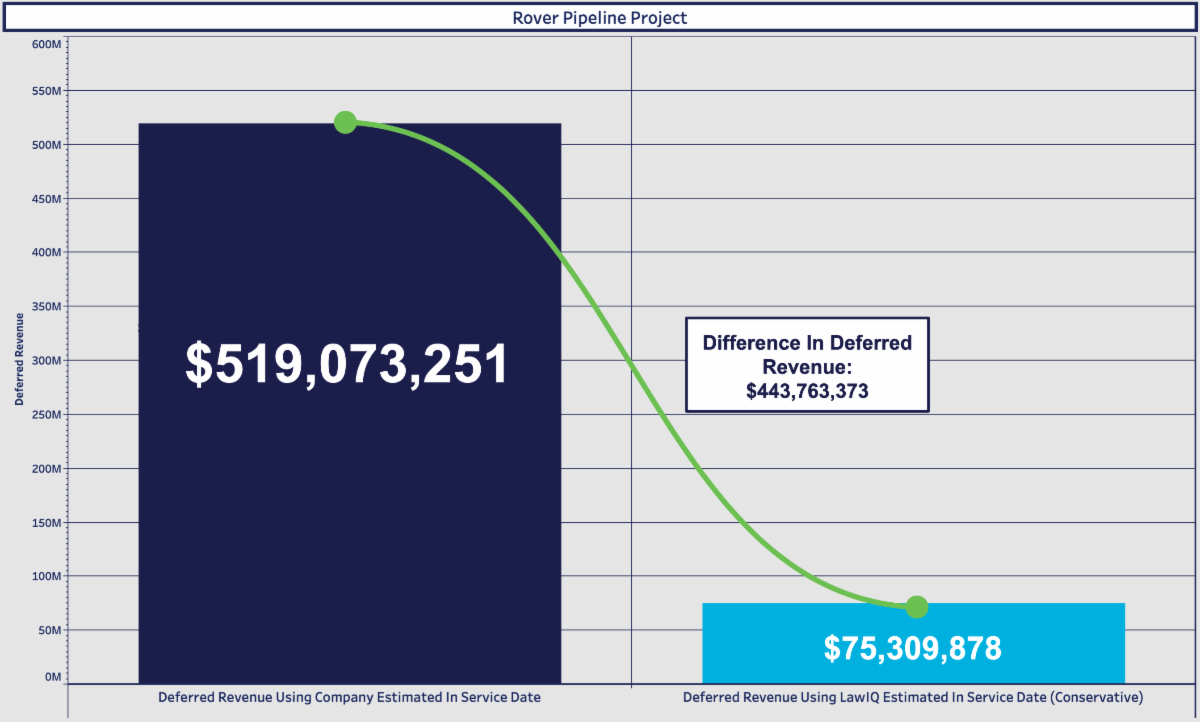 Let us know if you want to better estimate your project costs and schedule or understand how a potential delay may interact with a project’s contracts to reduce the overall expected value of the project.