August 7, 2020
What’s the issue?
Last Friday, Columbia Gas Transmission became the most recent natural gas company to file a rate case.
Why does it matter?
As a result of the changes in the FERC’s tax allowance policy and the costs associated with maintenance capital continuing to climb, we anticipate that more companies will be filing such cases in the coming years.
What’s our view?
We are beginning to gather the data necessary to assess these proceedings in a way similar to what we have for project-related data. Our preliminary findings show that, on average, these cases take about one year to move from filing to settlement, and that among the four key building blocks that form a pipeline’s cost of service, the two most important to watch are depreciation and return on rate base, and, specifically, what they filed for and what was received.
For years, the major pipelines avoided filing rate cases as they went through massive build-outs of their systems. But since the passage of the Tax Cut and Jobs Act at the end of 2017, we have seen rate cases filed by four of the six largest pipelines in the country. In 2018, both Texas Eastern and Transcontinental filed their cases; in 2019 Northern Natural filed its case and then just last week, Columbia Gas Transmission filed its case under Section 4 of the Natural Gas Act. Columbia’s last Section 4 rate case was filed on August 1, 1995, and the other three pipelines last filed their cases in 2004 (Northern Natural), 1990 (Texas Eastern), and 2012 (Transcontinental). The passage of the Tax Cut and Jobs Act, which reduced the corporate tax rate, combined with FERC’s policy change, which now prohibits pipelines that are owned by master limited partnerships from including an income tax allowance in their rates, no doubt spurred some of this activity.
But the filing by Columbia Gas also provides a hint that rate cases are likely to be more frequent. Columbia Gas is seeking permission to include a new provision in its tariff that would allow it to recover the costs of certain expenses without the need for filing a rate case. Columbia describes these as costs incurred “for modernization projects necessary to address the following categories: (1) safety and integrity; (2) system reliability; (3) storage modernization; and (4) regulatory compliance.” Columbia is seeking to recover these expenses through a cost tracker, an annual expenditure of up to $480 million, subject to a seven-year maximum of $3.0 billion. We suspect other pipelines are facing similar costs and, without a mechanism like Columbia is proposing, will likely need to file rate cases more frequently to earn a return on such investments.
To provide our customers with insight into the mystical world of rate cases, including the myriad of details that drive negotiation strategy, we have begun assembling the key data. In particular, we have begun tracking the four key blocks of costs reported in each case: operating and maintenance, depreciation and amortization, taxes, and return on rate base. In addition, as with projects, we are collecting information regarding the time it takes to move these cases from filing to settlement, as almost all eventually settle. Based on the cases that have been filed since the end of 2017, the average time for these cases to move to settlement is just about 11 months, and, of the four major costs centers, the two key variables to watch are the depreciation and the return on rate base, specifically what was filed for and what was received.
Total Cost of Service
When a pipeline files a rate case, its goal is to collect revenue across all of its various services that matches its total cost of service. Merely matching your total costs sounds like a bad thing, but the way it is calculated includes a return on the pipeline’s investment in its rate base. The four major building blocks of this total cost of service -- operating and maintenance costs, depreciation and amortization, taxes and that return on rate base -- are quantified in the chart below, which sets forth the percentages that each of these building blocks have contributed to the total cost of service for the cases filed since the end of 2017 that resulted in a settlement. 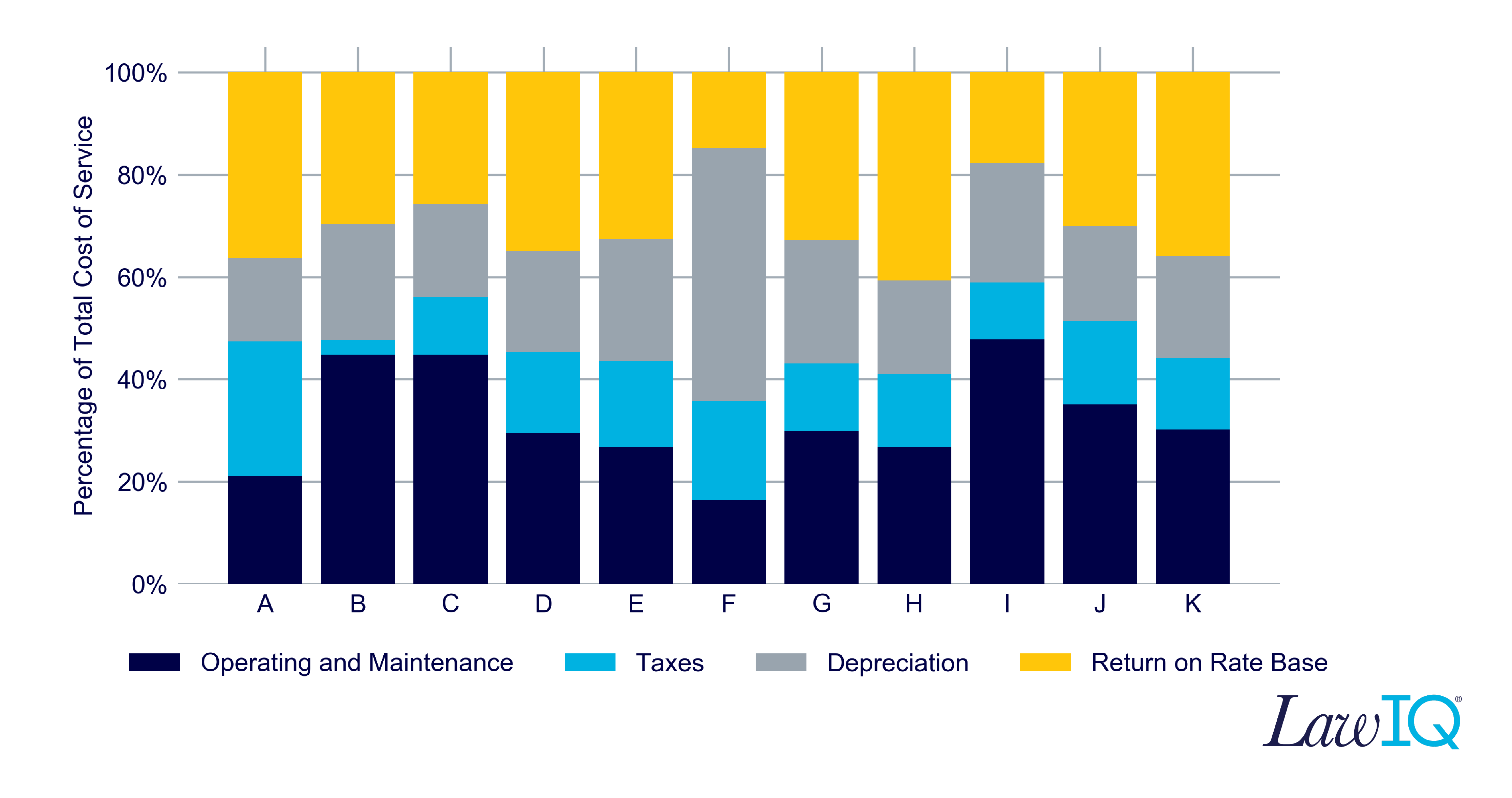 As seen above, depreciation and amortization, along with the return on rate base, combine to total slightly more than 50% of the overall cost of service reported by these companies. However, while there are disputes about operating and maintenance costs and taxes (largely due to the recent tax changes), these disputes have not typically been the focus of the parties. The depreciation rate, though, can have a huge impact, as can the return on rate base, because both are based on expert opinions, which leave a lot of room for variability, whereas, ultimately, taxes and operating and maintenance costs are generally fact-based inquiries.
Depreciation and Amortization
When these cases settle, they typically are settled on a “black box” basis, which means that the parties do not specify how the rates were determined and may not even disclose the final total cost of service on which the rates are based. However, the rates for depreciation and amortization are always specified because the company needs to keep its books in accordance with the agreed-upon rates. The key rate for most pipelines is the on-shore transmission pipeline rate, because for a pipeline company, that is typically the vast bulk of its asset base. Set forth below, we look at the range of this rate, combining both the depreciation rate and the negative salvage rate for this key class of assets, as requested by the company in its application and as agreed to in the final settlement. 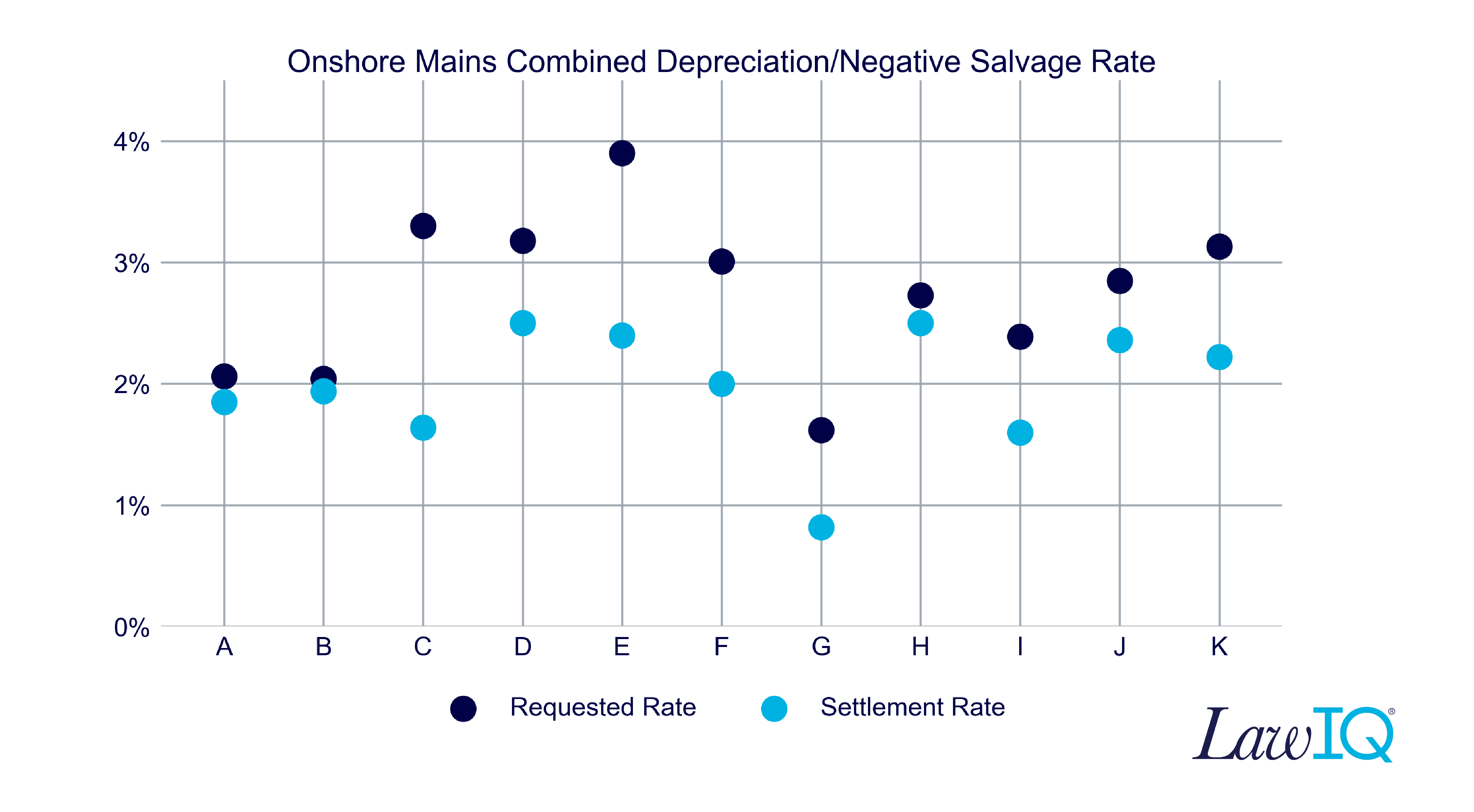 As seen above, the rates requested in the application are always reduced through the negotiation process, often by substantial amounts, on average dropping from 2.75% to 1.98% or almost 30%. This can lead to a significant reduction in the total cost of service requested by a pipeline.
Rate of Return
In these black-box settlements, the rate of return that formed the basis of the settlement is not often specified. However, in two recent cases, the parties did specify the return on equity that would be used for future projects. In those cases, the agreed return on equity was 1.75% and 3.9% lower than the pipeline had requested. Set forth below is the range of returns the pipelines have requested in all of these settled cases, both on a combined basis including debt and equity, and just the return on equity.
As seen above, the average overall return requested has been in excess of 10.5%, and the return on equity has exceeded 14%. We expect that the final return on equity that was in settlements was more like the 12.75% and 12.5% that were specified in the two examples where a return on equity for future use was agreed on.
Timing
The final issue is how long this process normally takes. FERC can only suspend a requested rate increase for a maximum period of five months. Below we show the time period it has taken these cases to move through the process to a final settlement.

As seen above, all of the cases took longer than five months to reach a settlement, which means that the pipeline will have typically put the proposed rates into effect prior to the settlement being reached. Shippers should therefore generally anticipate paying the higher rate for a period of time and then negotiating a refund as part of the settlement.
As we develop this data more fully, we would welcome any input from you, our customers, as to how you would use this data and what other data points you would like us to extract from the filings.