In Will TRRC Limit Production? Comments Are In, Here’s What the Industry Said, we provided a summary of the main arguments for and against the motion filed with the Texas Railroad Commission (TRRC) by Pioneer Natural Resources U.S.A., Inc. (Pioneer) and Parsley Energy, Inc. (Parsley) asking the commission to order production cuts across all of Texas beginning on May 1 of this year.

On Tuesday of this week, the TRRC held a hearing that stretched for almost 11 hours to receive input about the motion and whether it should issue such a prorationing order. The commission has listed this motion on its agenda for this coming Tuesday, and we expect it to vote at that time on whether to adopt such an order effective May 1.

Commissioner Sitton Stakes Out His Position

The day before the hearing, Commissioner Sitton issued a statement that explained how he would be approaching the question of whether to prorate. In his statement, Commissioner Sitton stated that the TRRC must not only consider whether to prorate, but that it is “CHARGED with this duty in Texas’ state laws” (emphasis in original). He then laid out the principles he believed should be followed to decide whether a proration order should be issued. He said that there were three key questions:

As he saw it, if the answer is yes to all three questions, then the commission must issue an order requiring proration. But if the answer is no to even a single question, then he would have to vote against the order.

Our overall view of the hearing is that the three commissioners were attempting to build a record for the positions that they intend to take, but that the record produced is not sufficient to justify prorationing. Chairman Christian and Commissioner Craddick were focused on how long the TRRC would be in the business of interfering in the markets, the intricacies of implementing such a measure and whether Texas should go it alone. Commissioner Craddick was very concerned about the small producers, those producing less than 1,000 barrels per day. All of their questions seemed to be directed at building a record for at least making the case that prorationing might be appropriate, but not in the short term, and, in any case, not by May 1. Commissioner Sitton’s questions seemed intended to build a record for a dissent calling for prorationing, but did not appear to be adequate to build the record needed to actually implement prorationing.

The last speaker of the day noted that a drinking game had started on Twitter that required a drink every time Commissioner Sitton used the word “waste.” And yet, surprisingly, the answer provided to this fundamental question by those supporting proration was vague and often equivocal. Commissioner Sitton’s search for such waste led him down various paths concerning whether waste had to be actual physical waste or whether the commission could consider economic waste and, if it could, how would economic waste be defined.

Pioneer asserted that all that is needed is economic waste and that economic waste occurs whenever production exceeds demand plus storage capability. Pioneer asserted that demand had fallen by 20 to 30 million barrels per day worldwide due to the COVID-19 virus, and that storage in the United States would be filled sometime between May and July of this year. Pioneer urged the commission to act before storage was filled to bring the market into balance. Following Pioneer’s lead to focus on storage, Commissioner Sitton asked almost every other presenter with expertise on markets when the storage in this country would fill. He never received a definitive answer, but it seems that the key determinant for predicting when the storage will fill will be how quickly producers cut production even without a prorationing order -- another topic on which there was no clear consensus.

Pioneer’s proposal was that the commission institute a 20% cut, but to exempt those producers that were producing less than 1,000 barrels per day. Pioneer asserted that this 20% reduction should be based on the average production of the producers over the last quarter of 2019. Set forth below is the average production for the top 20 producers in the fourth quarter and what their share of the cuts would be. 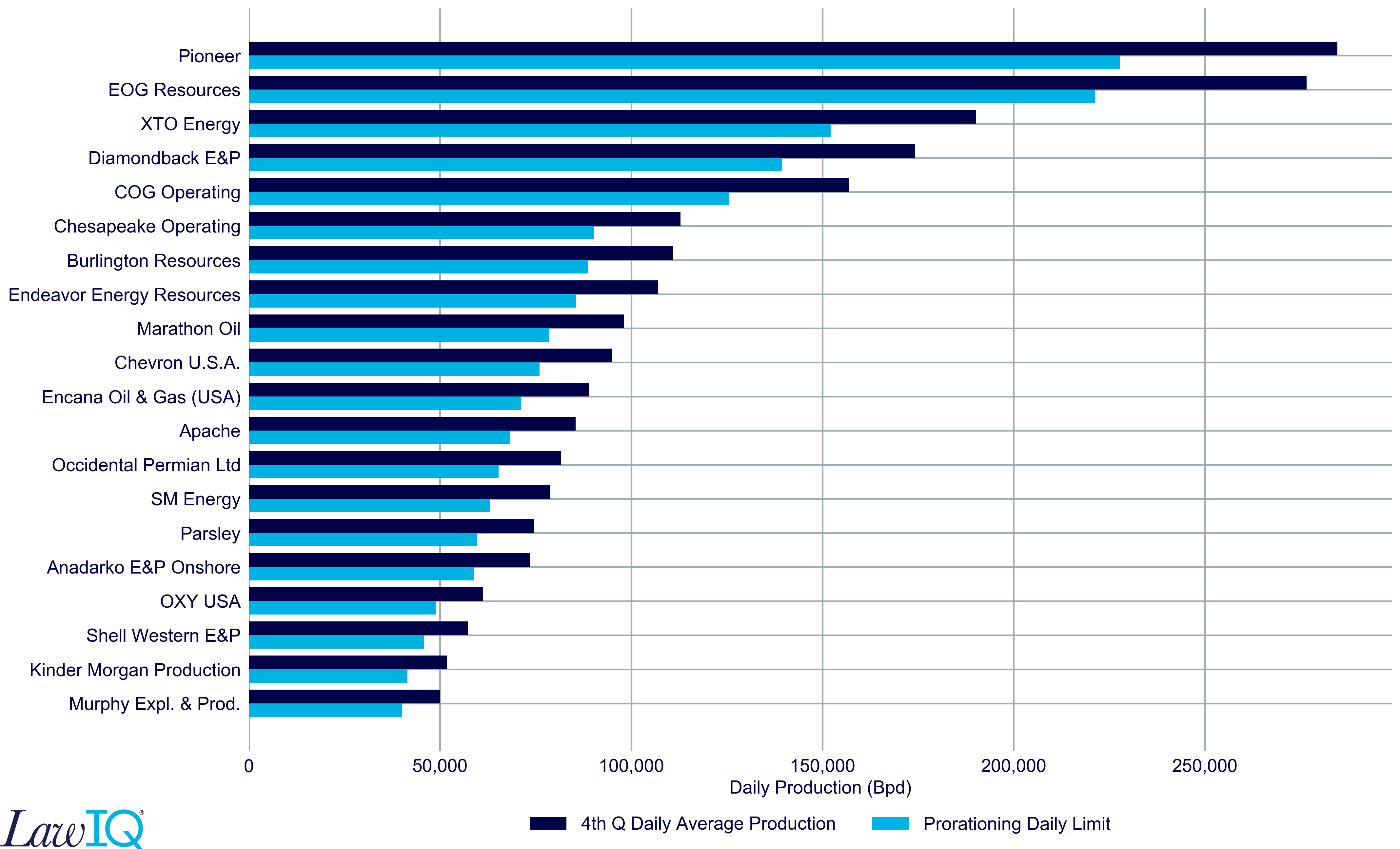 Those opposed to prorationing emphasized that the market is almost always out of balance and that market forces are what drives it back into balance, and they noted that those forces are at work right now. Lee Tillman, the CEO of Marathon Oil, predicted that there will be no waste and that the market will self-correct. He noted that companies have already announced 40 to 50% reductions in capital budgets, and asked whether those seeking the protection of the regulator were hoping to hide their own poor business decisions. He said a statewide production cut in Texas would be a very blunt instrument, as some of his company’s most profitable fields are in Texas and would be the last to be cut if the decision were left to the companies and not imposed by the regulator.

Is Waste Due to Production in Excess of Market Demand?

The simple answer to this question is one on which all of the speakers could agree. The demand for oil has collapsed as a result of the COVID-19 pandemic. But for many, that was an oversimplified question. The key question to them was whether the production in Texas was in excess of market demand. There were a number of nuanced answers to this question. First, Pioneer admitted that much of the production that is continuing is being produced to “drill through” the hedges that the production companies have in place. If there is a place to sell your product and you profit from the hedges you have strategically placed, does that mean you are overproducing? According to Marathon Oil, Texas has been oversupplying the market for five to seven years and no one complained because the industry had fought long and hard to be able to export crude to the world, and the proponents of prorationing now want protection from that global market. Almost all agreed that the global market is oversupplied by 20 to 30 million barrels a day, but the U.S. is still importing more oil than Texas produces. Does that mean Texas is still under-producing for the U.S.?

Can Waste be Effectively Reduced By the TRRC Prorating Texas Production?

The answer to this question is, almost certainly, no. Wil VanLoh of Quantum Energy Partners, who was in favor of prorationing, testified that the prorationing would need to continue until crude prices rebounded to over $50 per barrel from their current lows of around $20. This answer drew a disappointing head shake from Chairman Christian. According to Mr. VanLoh, U.S. crude production simply doesn’t make sense at any price lower than that. However, the commission heard from almost everyone that today’s crude market is a global market and that Texas is such a small sliver of the market that the impact of prorationing on prices would be minimal.

Even Pioneer advocated for a coordinated effort among all of the major producing states in the country and suggested that Texas should not cut until further cuts were agreed to by the G-20 countries, OPEC and OPEC+. While Parsley Energy urged the commission to take a leadership role and not make the cuts contingent on anyone else, Chairman Christian, in particular, seemed reluctant to make a symbolic gesture given that almost everyone else who testified indicated that a unilateral cut by Texas would even further damage the already ailing economy in that state.

Commissioner Craddick’s questions were often focused on the small producers, those producing less than 1,000 barrels per day, and whether these production cuts would help them. She received a variety of responses, but the thrust appeared to be that the small producers are being most harmed by their inability to access the pipelines needed to move their crude to the more lucrative markets, and are coerced into taking the price offered them at the wellhead by those companies holding firm pipeline transport rights. An argument she certainly heard was that forcing cuts on the large producers would free up the pipeline access for the small producers and improve their revenues. While her interest in the small producers is admirable, a production limit seems like a blunt instrument if the concern is access to the crude pipelines.

Our review of the TRRC’s production data shows that these small producers in 2019 produced less than 134,000 bpd, which is about 6.25% of the crude shipped on pipelines by the twenty-five largest producers. If pipeline capacity is the real concern of these small producers, a 20% cut in production to free up 6.25% of the capacity used by the major producers seems not to be the most surgical method of making that level of capacity available.

The Commission has listed this item on its agenda for next Tuesday’s open meeting. We assume that they will be taking a vote at that meeting on whether to impose prorationing effective May 1, as requested in the motion. Our expectation is that the commission will not approve any such action at that meeting, but may indicate a willingness to continue investigating such an action in conjunction with other states and perhaps issue such an order in the future based on a more comprehensive record, which could withstand the challenge that is certain to come if it were to implement prorationing.

Commissioner Craddick noted that Chairman Christian is the TRRC’s representative to the Interstate Oil and Gas Compact Commission, and that there are discussions being held there about the possibility of production cuts by other states. Oklahoma’s Corporation Commission has received a similar request to prorate production in that state and has scheduled a hearing for May 11. On Tuesday, we could certainly see the TRRC voting to table the motion for additional consideration, perhaps at its meeting on May 20. That would give the commission time to address even more practical issues that concerned the commissioners, such as staffing, reporting and the substantial penalties that would be needed on those that do not comply.

The commission also received comments on a number of other ideas that were beyond the scope of the petition before it and which would require a separate proceeding. These comments included the idea of limiting production by limiting flaring, and stopping the issuance of additional drilling permits. Some commenters used the proceeding as an opportunity to promote ideas that were outside the control of the TRRC, including forcing Texas-based refiners to use only domestic sources of crude and working with federal officials to impose tariffs or restrict imports. We don’t expect any action on these other suggestions.