Which Pipelines Have the Greatest Rate Risk?

Correctly anticipating whether rates for a particular pipeline are likely to increase or decrease in a rate case helps investors properly project revenue and helps shippers to properly negotiate long-term capacity agreements.

By combining our data on rate case comebacks and moratoriums with the data we also have on a pipeline’s cost structure and age of pipe, we can help our customers understand the rate risk for a pipeline, as demonstrated here for Northern Border, Gulf South, Dominion Transmission and Equitrans.

As we discussed in Taking the Mystique Out of the Growing Number of Natural Gas Rate Cases, we expect the coming years to be a period during which a substantial number of rate cases will be filed by pipelines. Some of these will be at a pipeline’s initiative as it seeks to raise rates to recover the costs it incurs to operate a pipeline that may require more maintenance than in the past or to recover increased taxes, if President-elect Biden is successful in raising the corporate tax rates. Other cases will be filed due to comeback provisions in prior cases, or at the insistence of shippers or even FERC, which may perceive that a pipeline’s rates have become excessive given its changing cost structure.

Correctly anticipating whether rates for a particular pipeline are likely to increase or decrease in a rate case helps investors properly project revenue and helps shippers to properly negotiate long-term capacity agreements.

By combining our data on rate case comebacks and moratoriums with the data we also have about a pipeline’s cost structure and age of pipe, we can help our customers understand the rate risk for a pipeline. Today we show how four pipelines, Northern Border, Gulf South, Dominion Transmission and Equitrans, compare to each other with regard to required rate case filings, changes in revenue as a percentage of net plant, changes in contract tenor, and age of their pipeline, which can be an early indicator of increasing maintenance costs.

Often, as part of a prior rate case settlement, a pipeline will agree to not file for a rate change for a fixed period of time, a moratorium, but may also agree to file a rate case by a date certain in the future, a comeback. The four companies we are using as an example today show how these circumstances may vary. (Note that for today’s discussion, we have combined the data of Gulf Crossing and Gulf South under the Gulf South name because they merged on January 1, 2020.)

As seen above, Dominion and Equitrans are free to file a rate case at any time, but are not obligated to do so at any point in the future. Northern Border could file a rate case at any time, but is obligated to do so no later than January 1, 2024. Neither Gulf South nor its shippers are allowed to seek a rate change before May 1, 2023, but are free to do so after that. But Gulf South is not obligated to file a case after that date. This understanding of the rate case situation for a pipeline is essential to understanding the rate case risk because, even if the pipeline is under or over-earning, it may not be able to do anything about it. Conversely, if there is a comeback, it is certain that the rates will be adjusted in the future and the question is merely in what direction and by how much.

Revenue as a Percentage of Net Plant

As we discussed in Taking the Mystique Out of the Growing Number of Natural Gas Rate Cases, two key elements in a rate case are depreciation and amortization, and the return on rate base. A somewhat simplistic way to evaluate these two elements in one measure is to look at the change in a company’s net plant and calculate its revenue as a percentage of net plant. If net plant is decreasing, that would mean that depreciation on the pipeline is exceeding capital additions. A high ratio of revenue to net plant could also be an indicator that the pipeline’s cost structure is improving to the point that it may be at risk of a rate challenge. However, a low ratio may encourage the pipeline to file a rate case to increase its rates.

As seen above, three of the pipelines have seen steadily increasing net plant numbers over the last few years, but Northern Border’s has been steadily falling. An increase in net plant may result from expansion projects or from maintenance capital expenses, so it often needs to be investigated further to understand its potential impact on rates. But a falling net plant is a sure sign that the pipeline is simply not spending capital of any type sufficient to offset the annual depreciation in its asset base.

Northern Border has also seen a steady rise in the ratio of revenue to net plant and it has consistently been higher than its peers. This may indicate that it is in a position where it is over-earning, and could explain why its shippers insisted on a comeback provision at the end of 2023.

As pipelines age, the operator often incurs greater costs in both maintaining the pipeline and in capital expenditures to replace aging pipelines that it may not be able to immediately recover in its rates. We noted this issue in Taking the Mystique Out of the Growing Number of Natural Gas Rate Cases, where we described Columbia Gas’s request for a cost tracker to recover, without the need to file a rate case, costs it expects to incur for “modernization projects” in four categories: (1) safety and integrity; (2) system reliability; (3) storage modernization; and (4) regulatory compliance. Columbia is seeking to recover these expenses through a cost tracker, subject to an annual cap of $480 million and a seven-year maximum of $3.0 billion. 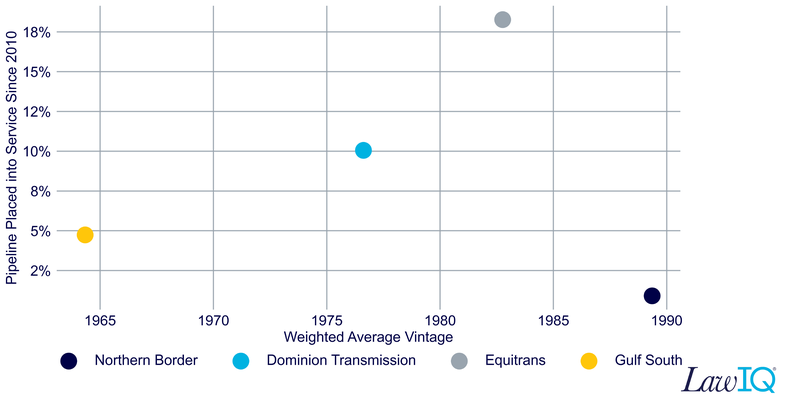 Another risk often cited by pipelines when they file a rate case is a declining usage of their pipeline such that they need to increase rates for the remaining shippers to counteract the reduction in contracted capacity. A similar argument can be made if the average length of the contracts is decreasing, which puts the pipeline at a higher risk of shippers not renewing their contracts.

As seen above, none of these companies have experienced a reduction in their overall contracted capacity, and Gulf South has seen a substantial increase since 2018. Of the four, Northern Border has the shortest weighted average contract tenor, but it has been getting better over the last three years.

As we look out over the next few years, the one company out of the four with the greatest rate case risk would appear to be Northern Border, as it is required to file a case by the end of 2023. From all appearances, it seems that the risk would be that it will be required to reduce its rates at that time. Conversely, when Gulf South’s moratorium ends in 2023, we would expect that it will likely seek a rate increase or seek to establish a cost tracker, like that proposed by Columbia Gas, to recover what we expect will be increasing maintenance costs and maintenance capital expenditures -- especially given that it ranks lowest among the four in its ratio of revenue to net plant. As for the other two companies, their moratoriums ended a few years ago and we do not see any trigger that would motivate them to file a case in the near future. The one exception, though, would be if President-elect Biden were to increase the corporate tax rates; that, along with other cost structure changes, could lead them to file a case in which they would likely seek to increase their rates.

Enter your email to receive actionable viewpoints each Thursday.

We publish Insights to help generate dialogues, inform functional teams, and enable senior leaders to make critical decisions. The Blog is a summary of our Insights viewpoints, posted on a two-week delay.

LEARN MORE ABOUT INSIGHTS GET A FREE MONTH OF INSIGHTS