Both the shipper groups and the pipeline groups have now provided their initial and reply comments to FERC's proposal (to adopt an index of just .09% above the Producer Price Index for Finished Goods), and below we review the suggested changes and rank them on a scale of most likely to least likely to be adopted by FERC. As we discuss, however, the action FERC takes on this issue could turn on whether the two nominees for empty commissioner slots are confirmed and take office before the expected decision by the end of this year.

Earlier this week, the Senate Committee on Energy and Natural Resources held a hearing to consider President Trump’s nominees for the two vacant FERC commissioner positions. One of the two nominees, Allison Clements, a Democrat, was nominated to fill the seat previously held by Commissioner LaFleur for a term expiring June 30, 2024. The second nominee, Mark Christie, a Republican, was nominated to fill the seat previously held by Commissioner McNamee for a term expiring June 30, 2025. Without these two nominees, the Commission currently consists of two Republicans and one Democrat. While these nominees will not change that balance of power between the parties, the Republican nominee has a very traditional regulatory background, having served on the Virginia State Corporation Commission (Virginia SCC), which is the utility regulator in that state, since 2004. In his prepared testimony at his confirmation hearing earlier this week, his initial point was that “[t]he Virginia SCC is an independent, nonpartisan commission” (emphasis in original), and he noted that if he is confirmed, he would “absolutely respect and defend that independence at the federal level as I have done at the state level.”

While some suspect that the current two Republicans could be influenced to take aggressive positions to increase the return for liquids pipelines, it would be surprising that a traditional regulator would be willing to vote in a manner that would likely be overturned on appeal. Therefore, our ranking of the issues discussed below is premised on the proposition that FERC will follow the path that has the best chance of being affirmed on appeal.

Not surprisingly, the issues raised by the shipper community seek to drive the index lower than the .09% adder proposed by FERC, making it less than zero. As a result, over the next five years, the rates charged by liquids pipelines would not keep pace with the rate of inflation. Similarly, the issues raised by the pipelines would generally increase the adder and in substantial ways, with one proposal being for the adder to increase from .09% to 1.27%, or a fourteen-fold increase over that proposed by FERC. Both sides tend to rehash arguments that have been rejected in prior reviews by FERC, and both sides accuse the other of results-oriented proposals.

In assessing the appellate risk from a Commission perspective, we have considered any argument that was rejected in prior proceedings to be at a high risk of reversal because FERC would need to not only defend the correctness of its current decision, but also explain why it reversed course from its prior analysis. The following chart shows these key issues, the approximate amount of the change in the adder each would have, and our assessment of the risk that adoption of that change by FERC would be overturned on appeal. We then discuss our views in more detail below. 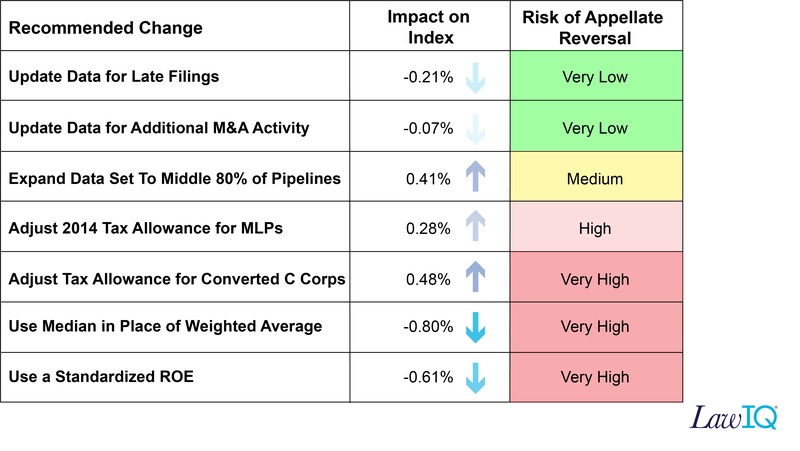 As we stated in our preview, making even minor adjustments in some of FERC’s methodologies can lead to a very different rate. For example, the Joint Commenters, a group of shippers consisting of Airlines for America, Chevron Products Company, the National Propane Gas Association and Valero Marketing and Supply Company, made two suggestions that should not be controversial. The first tweak they recommend is to include data from companies that may have filed their 2019 Form 6 through July 22, 2020, which is consistent with the date FERC gave companies to update their filings to reflect FERC’s revised policy on the method for calculating a pipeline’s return on equity. Also, the Joint Commenters believe that they identified four additional mergers and acquisitions that the FERC staff’s calculations omitted. The proposal is to treat these mergers and acquisitions in the same manner FERC did for those FERC had identified. Neither of these suggestions would appear to create any risk for appellate reversal, but would drive the adder down by .28% to a negative .19%.

Expanding the Data Used Beyond the Middle 50% of Pipelines

The Association of Oil Pipelines (AOPL) argues that FERC should expand the dataset used to calculate the index beyond the middle 50% to include the middle 80%. This is a simple process to implement, but, as pointed out by the shipper community, expansion of the data set was rejected in the 2015 review and the middle 50% already includes 82% of the total barrel miles reported by the companies in the entire data set. FERC would have a risk of being overturned were it to change its methodology, and there seems to be no basis for selecting 80% versus 60%, 70%, 90% or 100%.

Normalize the Data for FERC’s Change in Income Tax Policy

As we also anticipated in our preview, we expected there to be suggestions on how to incorporate the Tax Cut and Jobs Act and FERC’s revised income tax allowance policy into the calculation. The two industry groups used this approach as a means to suggest substantial increases in the index. AOPL argued that FERC should adjust the base year data for all pipelines that were owned by a master limited partnership (MLP) in 2014 and 2019 by eliminating the income tax allowance reported in 2014 and removing an “estimated amount” of Accumulated Deferred Income Taxes (ADIT) from each pipeline’s balance sheet. ADIT is not reported on Page 700, the source of FERC’s calculation, and the removal of the ADIT impacts other calculations such as return on rate base. The adjusted amount would not be directly calculable from the Page 700 information and AOPL could only “estimate” it. Therefore, any effort to “adjust” the filed data is likely to be erroneous and would make the process subject to a high risk of being overturned on appeal.

The Designated Carriers, a group consisting of Buckeye Partners, L.P., Colonial Pipeline Company, Energy Transfer LP, Enterprise Products Partners L.P., and Plains All American Pipeline, L.P., would take the suggested adjustment by AOPL even one step further. For companies that were owned by an MLP in 2014 but were converted to a corporate form at some later time period, the Designated Carriers, unlike AOPL, would adjust the 2014 numbers of such companies by similarly eliminating the tax allowance and any ADIT, but keep the 2019 data as reported. This one change increases the adder from the .79% recommended by AOPL to the 1.27% recommended by the Designated Carriers.

Use a Standardized ROE

Use the Median of the Barrel-Mile Cost Changes

The LSG also suggested that the Commission should use the median of the barrel-mile weighted cost changes for the middle 50% of the oil pipelines rather than the weighted average. This would be a significant change in the FERC methodology, and, as correctly pointed out by those opposing the change, the weighted average is the only one of the three measures that takes into account the size of the pipeline. Eliminating this factor would overemphasize the importance of the small pipelines and definitely skew the results, which would lead to this suggested change being overturned on appeal. In our preview, we had suggested a far more defensible adjustment, which is to calculate the weighted average using the data from 2019 rather than 2014. Like the LSG change, this would reduce the index, but apparently the LSG would rather go for the home run and bypass the single.

Overall, unless FERC chooses to go out on a regulatory limb, we would expect only the tweaks suggested by the Joint Commenters to be incorporated, which would reduce the index from a positive .09% to a negative .19%. That would mean that, over the next five years, the rates of the liquids pipelines would not be able to keep pace with the rate of inflation as measured by the PPI-FG.